MERGER is a single player role-playing game about trying to survive in a world of living predatory corporations. While the game is certainly a metaphor for living in late-stage capitalism, it is also quite literal. Corporations in MERGER are large, faceless, monstrous entities that span time-zones and continents, gestalt organisms built of millions of individuals. We made them but they answer to no one. They use us to reproduce, feed, and defend themselves.

Your character can see these corporate bodies for what they really are. They glimpse flesh in the cracks of the cement, see eyes looking back at them in the conference room, and can feel blood under their feet as they walk between skyscrapers.

Are they alone in this revelation? Will they attempt to leave the corporate body, or remain a cell in this immoral behemoth, biding their time to strike? Play to find out what happens!

"Corporate horror that hits so close to home you just might start to see tentacles beneath the concrete. But it's just your imagination. Right?" - The Weekly Scroll

MERGER uses the Forged in the Dark engine at it's core. You can spend your character's stress to add dice to your pool, or even temporarily increase the size of your dice to get an edge. Failures and mixed successes will yield complications that will hinder your character. If a character suffers enough stress they develop insights that can help them overcome challenges but also increase the stakes of the game by granting the corporate bodies more dice and more difficult challenges.

For an interactive digital sheet click this link to download a copy of the MERGER character sheet for Google Sheets.

Check out these actual plays and reviews of MERGER:

This work is based on Blades in the Dark (found at http://www.bladesinthedark.com/), product of One Seven Design, developed and authored by John Harper, and licensed for our use under the Creative Commons Attribution 3.0 Unported license (http://creativecommons.org/licenses/by/3.0/).

In order to download this game you must purchase it at or above the minimum price of $10 USD. You will get access to the following files:

Ships to anywhere in the world. Please include your shipping details at the download page. Scroll down and click the button that says "Provide Information".

Love the game. Bought the physical zine just a few days ago but now im worried that I did something wrong. All I got was a download link. I paid 15,60...

If you don’t see a “Provide information” button at the bottom of your download page please send me an email with your shipping address michael(@)notwriting(.)net

It actually showed up this time. Everything should be filled out and all I got to do now is wait for a delivery. No rush.

Thank you Michael, sorry for the freak out.

No worries, happy to help!

Such a fun, addicting game! A good level of crunch, high stakes, amazing tension and creepy prompts to tell an awesome story.

Thank you so much!

Is there a physical copy of this available for purchase somewhere?

No print copies available at the moment. I'm still waiting to see if folks claims their Kickstarter copies for the first print run, but I'm planning on selling the remainder of what I have soon!

Looking forward to that then. Shame I missed the KS!

I just finished playing for the first time and it went great! The gameplay is tense and addictive and the world and story laid out in the book are dark but engaging.

I largely focused on the mechanics and briefly imagined the narrative repercussions of my rolls in my head, but I think the game would be even more rewarding to those who want to flesh out their character's story by treating the results of rolls and character sheet decisions as journaling prompts. The game is written succinctly enough that focusing on the gameplay is fun, but evocatively enough that elaborate stories could be created by those so inclined.

The gameplay does a great job complimenting the genre it's residing in; it's a horrific world where corporations control everything (perish the thought!), and so the dice are stacked against the player from the get-go. As such, it's definitely useful to start playing with the knowledge that you'll be losing a lot, both in terms of your character's resources and in competition against your corporate enemies. With that in mind, it's a great time and I highly recommend it.

backed it and I’m excited to Merge

Looking forward to it! 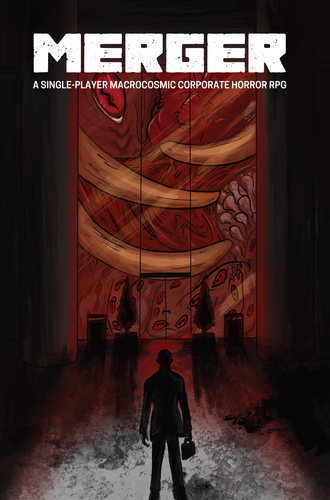 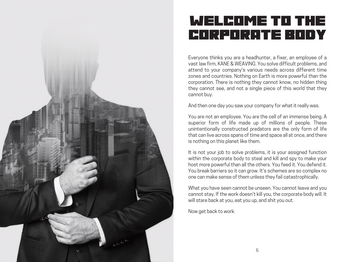 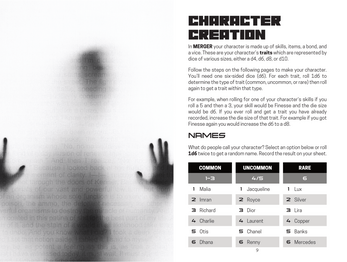 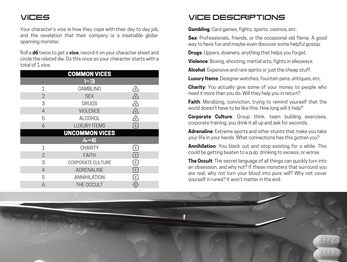