Spooky Action at a Distance is a single-player tabletop roleplaying game about humanity’s first contact with alien life. You’ll create the circumstances of first contact including the method of interaction and humanity’s base camp. You’ll then create your character, the envoy, who will attempt to interact with the alien. You’ll write about first contact, what the envoy discovers about the alien, and define the alien as you play.

To play the game you will need these rules, 2 six-sided dice (referred to as 1d6 or 2d6), and a journal to record your sessions.

Spooky Action At A Distance Is a solo rpg about the tension of first contact.

The PDF is 14 pages, with a clean and thematic layout. There aren't any interior illustrations, but it also doesn't feel like Spooky Action needs them. The 'decommissioned document' vibe is so strong throughout that honestly pictures would clash.

Writing-wise, everything is clearly explained, and the game is very good at both getting into and staying in its atmosphere. It does rely on roll-tables to generate certain story beats, so it might feel a little bit random in some ways, but the core of Spooky Action is the player's response to that randomness, so I don't think any of the design here detracts from that.

Gameplay-wise, the bulk of what you'll be doing after setup is asking a question and then rolling to see how extreme the consequences of asking that question are.

More than in other solo rpgs, Spooky Action leans on you to fill in the specifics. If you ask "what is the alien's form" and the roll table says "the alien becomes restless," it's fundamentally up to you what this means. Are they uncomfortable because they're hiding something? Are they slowly decaying in earth's atmosphere? Are they frustrated by the speed or nature of your communication?

By a similar token, the game's epilogue is fully open-ended. It's a writing space where you can draw together all the plot threads in your game and make a coherent whole out of them.

Overall, this isn't a solo game that leads you through a specific, fine-tuned narrative. It's a chain of prompts and uncertainty designed to pull a narrative out of you. If you like telling stories and you like slower burn, contemplative sci-fi or horror, this should definitely be something you pick up. 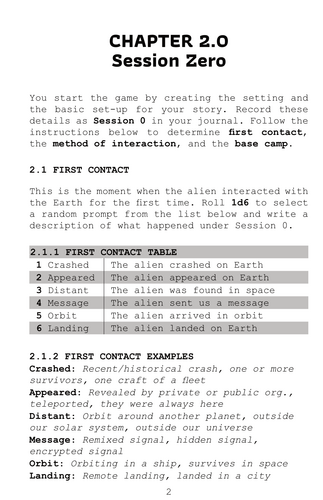 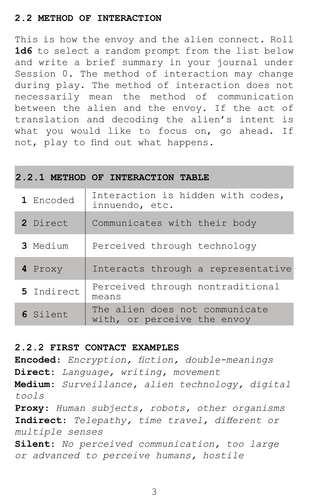