" Alright listen up, there's a state of the art A.I. known as Solaris. They plan to develop a new super narcotic so they can take over the White House. We'd stop them ourselves but there's one problem.

Wild Speed: Space Family is a game about an extraordinarily over the top action film. Players play characters in the tenth iteration of a popular action film franchise where ridiculous stunts, inexplicable science, and seemingly magical technology are common elements of the plot. Feel free to base your game off of an existing action film franchise or make up your own.

The characters are part of a crew of thieves, street-racers, and hackers. You’re not just friends, you’re the Family. You’ve done more death-defying heists and impossible missions than you can count. You’ve saved the world at least twice already, and you’ve been approached to do one last job.

And this one is in space.

THIS WORK IS LICENSED UNDER A CREATIVE COMMONS ATTRIBUTION-SHAREALIKE 4.0 INTERNATIONAL LICENSE. TO VIEW A COPY OF THIS LICENSE, VISIT HTTP://CREATIVECOMMONS.ORG/LICENSES/BY-SA/4.0/

Wild Speed Space Family is an homage to the excesses of the Fast And The Furious movies.

It's 9 pages, with a clean black and white aesthetic, plenty of consistent art, and some great gear shift diagrams explaining states of play.

Mechanics-wise, WSSF's central focus is on success. The players succeed, by default. Dice rolls are to determine what kinds of things the game's scenes focus on, and players choose how to act out and engage with the prompts.

It's a neat approach, in that it's both fluid and it guarantees a satisfying story. Nobody has to be on point against the dice scuttling the plot. Everyone can relax and collaborate.

WSSF does follow a relatively tight structure, with the plot organized into specific acts and scenes, but this didn't feel restrictive to me. The focus is on playing through the individual story beats, not figuring out how to structure the plot. The game lays the road ahead of you and you decide how to drive it.

Resources-wise, WSSF has two choices for safety mechanics: taste menu and x-card. Both are explained well, and the structure of the game (and its focus on riffing and character drama) doesn't require things like a big bestiary or an equipment chapter.

WSSF may require a little bit of hacking if you want to replay it. Since it's so anchored to its space car movie theme, if you want to do an 1800s cross-country race called The Past And The Furious, you'll need to change a lot of specific plot points. That said, this feels worthwhile. The game radiates fun, and putting different spins on it is a great way to build your own Car Family film series through occasional one-shots.

Overall, I'd recommend this to anyone who can get caught up in the ridiculous energy of big blockbusters. Wild Speed Space Family is self aware, but it isn't really a parody. It really enjoys the material it's engaging with, and its fun is infectious. Bring this out for one-shots, or to get everyone's acting energy going before a big game. If you need mechanical difficulty and game crunch, it may not be your jam, but if you can enjoy over-the-top scenarios and spending time in the spotlight, this is definitely worth your time.

Thanks so much for the kind words. 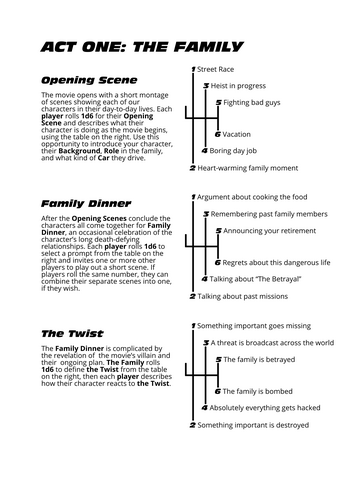 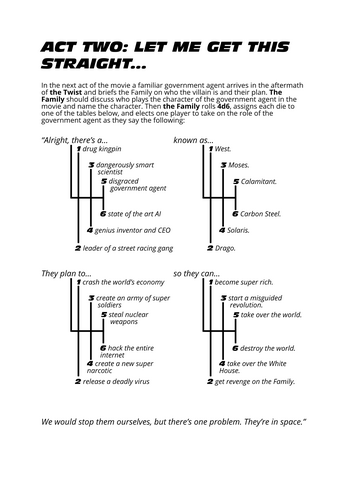 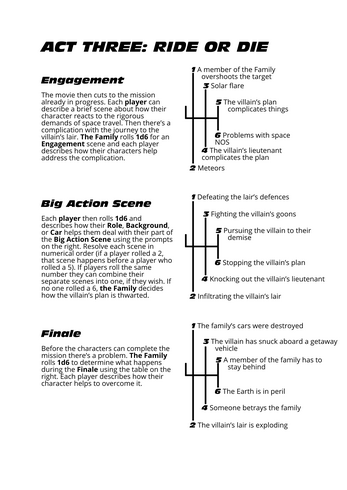