Building a fictional world from scratch is a lot of work. Whether writing a story or running a tabletop role-playing game for a group of friends, it takes practice to build an intricate setting complete with warring factions, a timeline, and non-player characters who compliment the story. Often all this effort creates details that are never relevant to your players or principle characters. World Maker is an exercise meant to focus your energy into details, relationships, and traits that are relevant to your main characters or the players at the table.

Hi! First time commenter, but this was such a fun exercise that I had to share. It was a tiny bit confusing to start, as it seems like a lot, but you get the hang of things very quickly. I agree with kumada1 - this is great for those who like writing stories/novels, as it gives you complex characters in a flash, which gives you a great starting point for writing.

Overall, kudos to the creator - a fun and unique exercise that takes no time at all and yields some pretty great results!

this game was a lot of fun! I created a fascinating scifi world featuring a biopunk cult, a potentially evil scientific corporation, and an AI that may or may not be going rogue, all with just a few drawn cards. Very well done! Highly recommend this game.

Hello! I got a copy of World Maker a while back through humble bundle and am really enjoying it so far.

The version I got references character (and other) sheets that weren't included in the copy. I came here to buy V1 (since it looks like those were removed in V2), but it wound up being a second copy of the no-sheets version. Is there any way to get those sheets?

Hey Isaac! Thanks for playing World Maker. I removed the playsheets a few versions ago, but have now added them back to the itch page. You should be able to download them now.

Any chance we could get a variant without the background texture? (Feedback wise, I like this - quicker than the StoryForge cards but a similar amount of detail can be generated in most cases.)

Absolutely! Just updated with a (No Background) PDF. Enjoy!

It's 10 pages with great, readable layout, but no major illustrations, and it uses a deck of playing cards for randomization.

Surprisingly, World Maker feels almost better tailored to setting up novels. It allows you to randomize genre, randomize and randomly flesh out central characters, and then it has you figure out the connections between your characters---and in doing so establishes the setting.

I think World Maker is a heck of a utility if you write NaNo. There's no fussing over what your novel's going to be about. You just pull some cards, make some decisions, and you're off.

As a game design toolkit, though, I think its helpfulness depends on whether you like building settings around characters, or building settings without worrying about characters. World Maker starts with characters and works outward, so any game you build from it is going to have a few *very* important NPCs at its heart.

Overall, if you're a writer who likes to improvise or a GM who likes to build your settings around certain core characters, get this. If not, it's still a good way of putting together complex NPCs, and I'd recommend picking it up for that.

would it be okay for me to make and share a web app that uses this system?

I wouldn't charge for it, just as a random project.

Absolutely, and please share it here when you're finished!

I'm so bad at UI but the logic is all here now: https://world-builder.georgewl.dev/

Wow, this is so cool!

thanks, i basically hacked away at it in my spare time.

I've played this a couple times over the past week and really enjoyed it. Enough so that I sat down with a label maker and created a deck with all the prompts on the cards to speed up play. 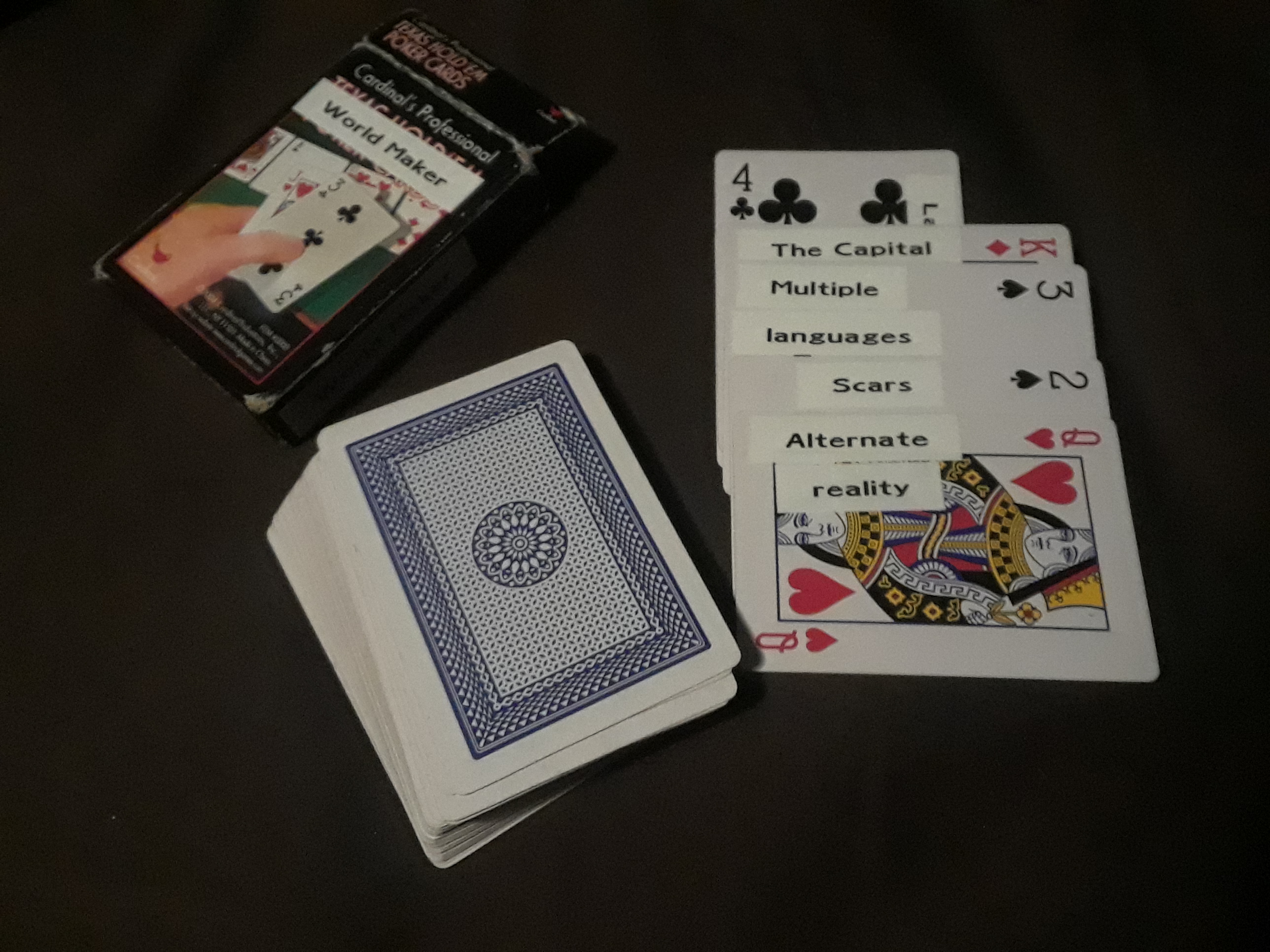 Neat idea! Having the cards makes it a lot easier to rearrange them till the story makes sense.

I made a video where I try this game out! Easy and helped me come up with alot of great ideas!

Oh awesome! Thank you for the support, can't wait to watch the video.

Thanks for the view! I liked the game so much I might do more videos! Its really helping with idea generating and its a good writing exercise 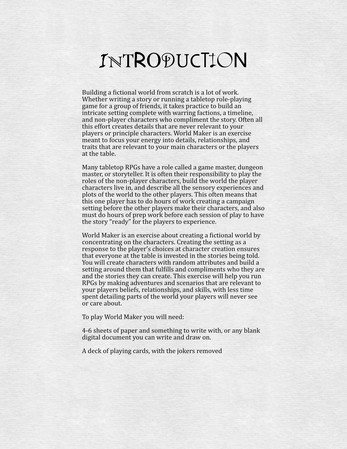 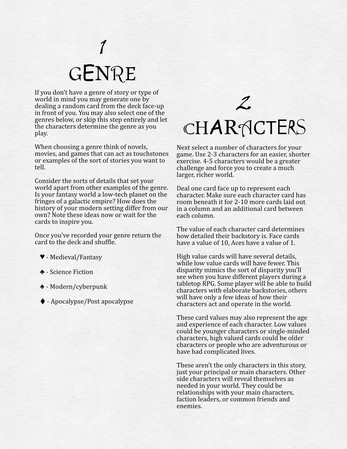 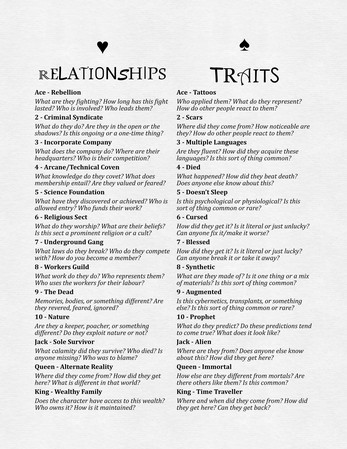